This article is being posted to encourage readers to consider that we may be giving hazard reduction burning a “bad rap”.

There is a tendency to complete large burning activities in a short period because of available resources and pressure to comply with statistical burning activity targets that report upon the amount of area burned, rather than the quality of the burn. This tendency creates a situation where country is subjected to fire activity that is way too hot.

It has been suggested that hot burning activities were less frequent when individual brigades were allowed to conduct burns with short notice. The red tape that is now required before a match is struck has created narrower window of opportunity to complete a burn. Greater numbers of firefighters, more drip torches, more fire and more expensive methods of burning are now used to get the burn put in quickly. 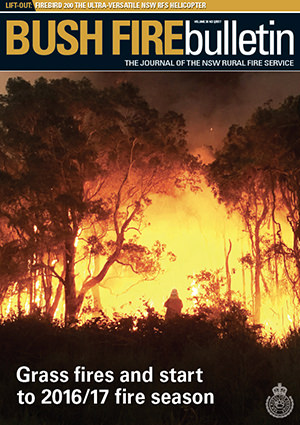 An article that was published in the NSW Rural Fire Service, Bush Fire Bulletin (Volume 38 No 3/2017) is testament to the suggestion of too much fire in a short period.

The article titled “Aerial Incendiary Machine” appears on page 28 of the Bush Fire Bulletin. Click on the cover photo (above) to view the original article.

The aircraft can be fitted with an aerial incendiary machine which drops capsules of flammable material at a rate of up to 240 per minute.

The incendiary capsules contain potassium permanganate. Once injected with ethylene glycol, the two chemicals have a delayed exothermic reaction to produce an intense ignition source. 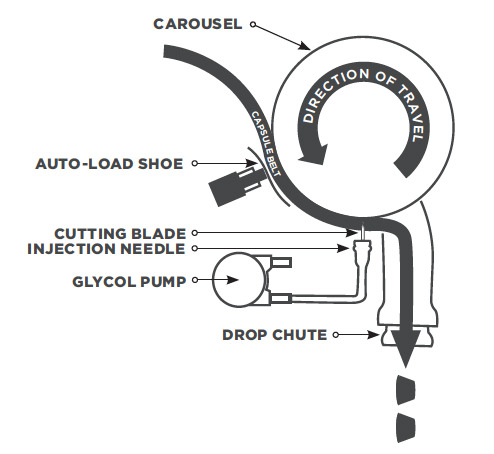 Large hazard reduction burns, or areas that are hard to access by truck or foot, are the most suitable for ignition by aerial incendiary. Areas that require hazard reduction are identified in Bush Fire Risk Management Plans. Once identified burn plans are prepared and a request is made to the State Air Desk for aircraft and personnel to assist with the burn.

It has been said that you don’t need 20x fire trucks, 60+ firefighters or even a helicopter to complete a successful burn.

The recipe for a successful cool burn is:

The secret to getting the right day is to remove the red tape so that a brigade (or land owner) can observe the right conditions, make some quick plans, notify persons as required and get started as soon as possible.

Cooler burning is better for the environment, it spreads burning activities out over a longer period (less concentrated smoke haze) and it can be completed on a shoe-string budget (more money for other NSW government spending like hospitals and schools). The cost savings for a cooler burning hazard reduction program has the potential to save our communities enormous sums of money because we will see a decrease (over time) in land and property destruction.

Comments emailed to the VFFA included:

G’day Mick,
It’s bitterly ironic, with all the publicity about the Dreamworld inquiry into the deaths of 4 people as a result of lack of maintenance, that we can lose hundreds of lives and thousands of homes in megafires due to lack of maintenance of the bush, and RFS commissioners and junk scientists like Bradstock get more medals and money. No accountability!
Regards

Hello Mick,
I don’t know the circumstances of the Buxton hazard reduction in the Southern Highlands in October 2016 but the photo illustrates a burn that is unduly hot for hazard reduction and likely to attract criticism from people concerned with wild life, etc.  This burn will result in dense regeneration of the understory shrubs but a faster build-up of flammable surface fuels than a mild burn using less ignitions for and allowed to burn over several hours.
This ignition pattern and resulting fire behaviour is the inevitable consequence of a device that spits out 4 incendiaries /second.  I know that volunteers time is precious and there is always a tendency to get the burn wrapped up as soon as possible but the key to efficient hazard reduction is to use just enough fire to burn the whole area in the available burning period and to avoid the high intensities cause by mass or line ignition.
Cheers

G’day Mick,
It doesn’t matter whether it’s aerial or ground ignition; the stupid attitudes, rules and regs, and loss of knowledge/experience these days ensure moderate to high intensity prescribed fires that promote scrub and pestilence whilst increasing fire hazard. In the 60s, fire scientists worked out that we need to light spots that coalesce at the end of the day. Same principles as traditional burning. There’s too much to do from the ground, so blackfellas and whitefellas need to get together to do it right using modern technology to make it doable.
Regards

Ironic, really.
Alan McArthur, George Peet and co had worked out how to light a prescribed burn in the early 1960s. The major requirement was the capacity to predict headfire rate of spread (ROS) for the target area under the given weather conditions, then use a prescribed burning guide to tell you strip width and spot distances along the strips. This was designed to ensure minimum input of fire, and would allow individual fires to meet up at the end of the day when the hazard dropped away.  I must have done it dozens of times, for both hand burns and aerial burns.
I suppose the missing factor in the situations you are discussing here is the burning guide? or maybe the basic fire behaviour science. But even in their absence, a test fire or two will always give you headfire ROS and then the calculation of strip width and spot distance can be calculated, with a good safety factor built in.
In  the early days before we had a burning guide for the karri forest, in every case where I stuffed up a burn and it was too hot, I realised later that it was because I put too much fire into it. I learned that it was always better to err on the side of not enough fire, allowing infilling the next day if necessary. Of course I am speaking as a former officer of a gov department with time on my side, not as a vollie with other things to do.
I sometimes think of a saying of that famous Formula One driver Ayrton Senna, when asked about his tactics in a Grand Prix: “I try to drive as slowly as possible … but still win”.
That’s how it is with prescribed burning. You put in as little fire as you possibly can, but still get a win in terms of effective fuel reduction.
Cheers

One Reply to “Burning gets a Bad Rap”