The VFFA received an email from a member, suggesting that the HSR program for volunteers has not been properly addressed by the NSW RFS.

The RFS has published the following key HSR election dates:

The VFFA is concerned that the period (12 September to 8 October 2018) is insufficient time to properly advertise this important program to all volunteers across the state.

The RFS is seeking to fill 47 HRS positions for NSW.

The VFFA is concerned that 47 HSR’s across the state is simply a compliance exercise designed to appease the legislation and SafeWork NSW is allowing it.

The RFS claims to have over 70,000 volunteers. Even at a more realistic figure of 20,000 volunteers fighting fires, the number of HSR’s should be greater than 47.

Time is Running Out

Do you want to help make your fire fighting workplace a safer, healthier and cohesive workplace?

Do you want to make a real change in your workplace in ensuring compliance to the Work Health and Safety Act 2011 (WHS Act)?

Become a Health and Safety Representative (HSR) and help make your workplace a safer and healthier place to be.

If there is more than one nomination for one position an election needs to take place.

Below is a link to SafeWork NSW on the process for the nomination and election is required for a HSR.

Information Published by the RFS

Click the pdf icons (below) to view the documentation.

This fact sheet provides details for members about the Health and Safety Representatives (HSRs) election process. The NSW RFS, in accordance with Work Health and Safety legislation, is assisting all 47 workgroups with the process of HSR elections. NSW RFS workgroups include 45 geographically bound districts, Headquarters, and Glendenning (incorporating Operational Mitigation Services, and Planning and Environment Services).

Completed Nomination Forms must be received by the Returning Officer, NSW Electoral Commission by no later than 12.00 noon, Monday 8 October 2018.

A completed nomination form must be received by the Returning Officer, NSW Electoral Commission, not later than, 12.00noon, Monday 8 October 2018.

HSRs are entitled to attend an approved five-day training course in work health and safety and a one-day refresher course each year during their term of office.

Click on the button (below) to read a SafeWork NSW fact on Conditions for approved training providers delivering health and safety representatives training.

Powers of an HSR.

You as an HSR have some serious functions to perform in representing the workers in the workplace and the WHS Act legislation to give the HSR power to ensure compliance in the workplace. Click on the button (below) for more information.

Volunteers have been overlooked

Here is some evidence that supports the claims made by the VFFA that volunteers have been overlooked by the RFS in this matter.

1. RFS staff were notified by their representative body on the 11 January 2018. Click on the image (below) to view the pdf document. 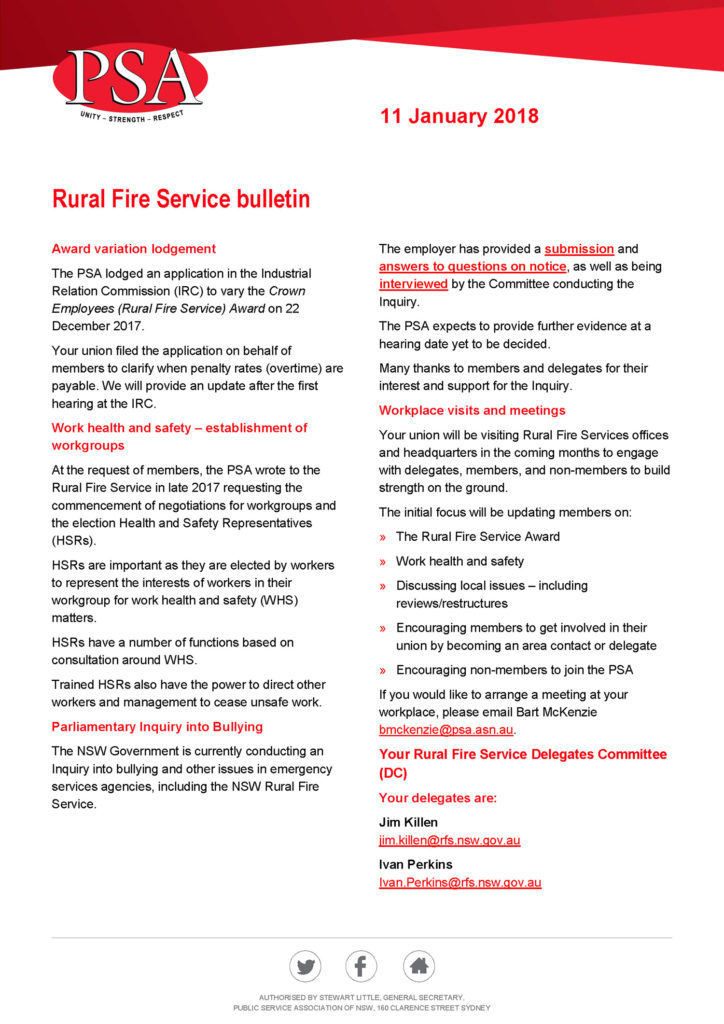 2. The My RFS web site (designed to assist volunteers and staff) advertised this program as late as September 2018. Click the image to view a lager image size. 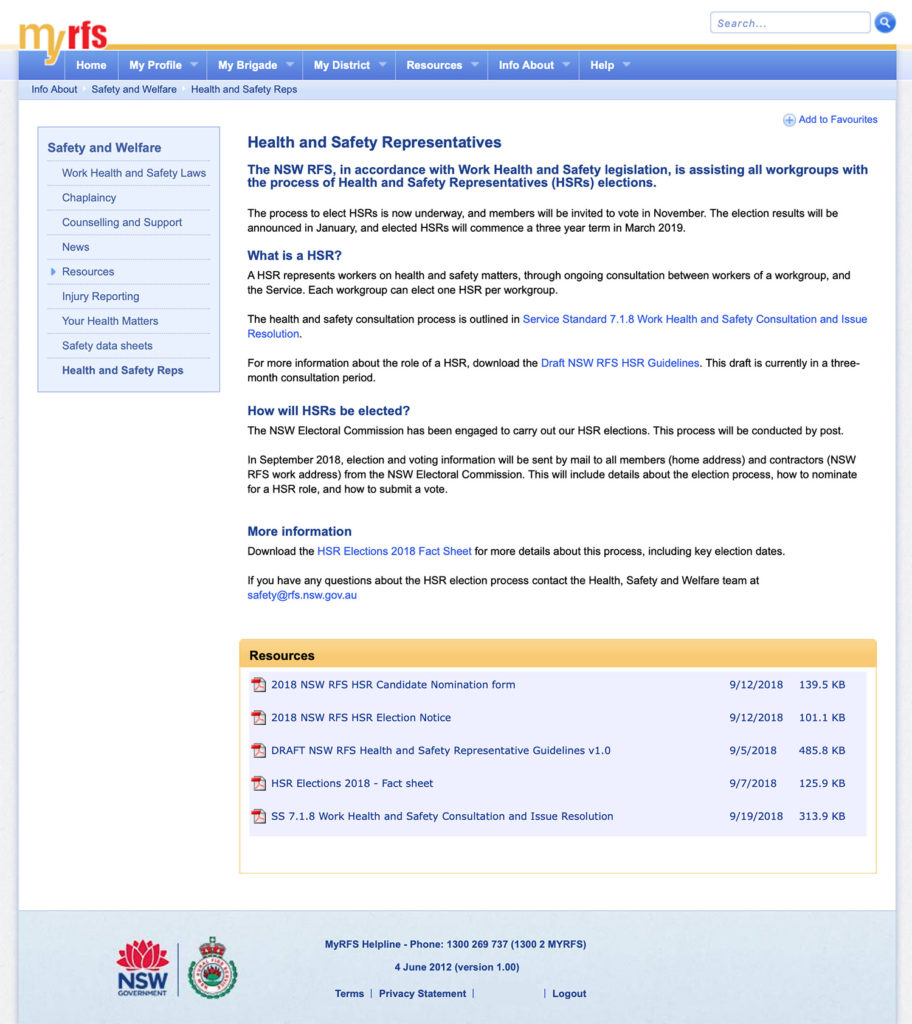 3. A search of the RFSA web site (search term was HSR) revealed nothing. 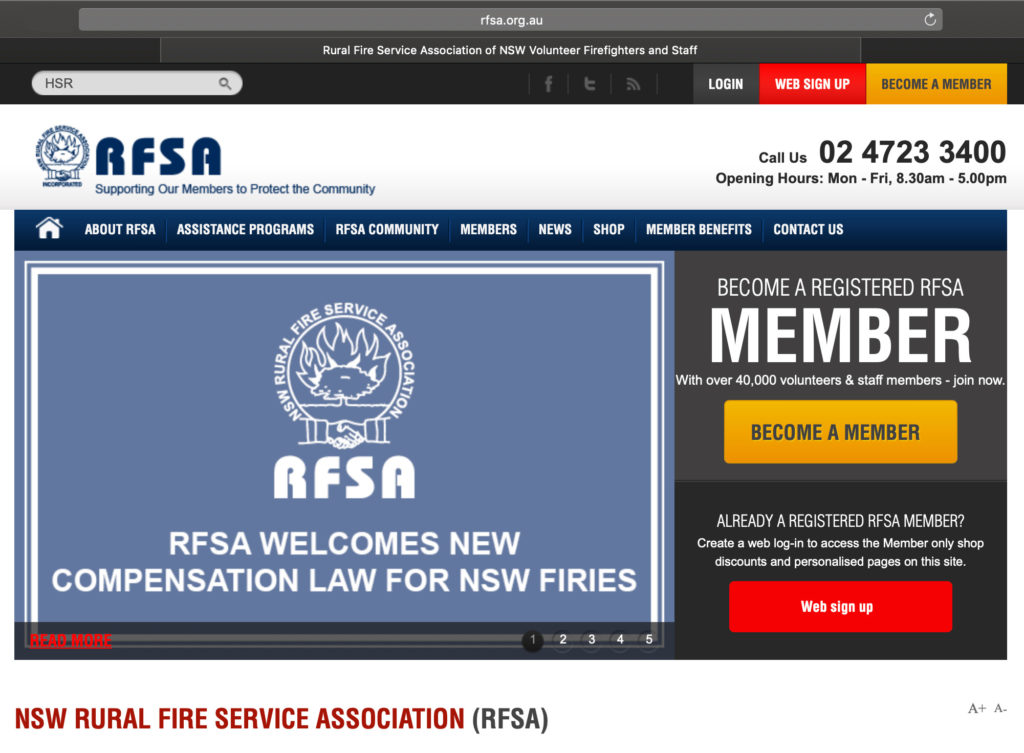 Feel free to make a comment or provide feedback on this topic.

One Reply to “Health and Safety Representatives (HSRs) – Volunteers Overlooked”