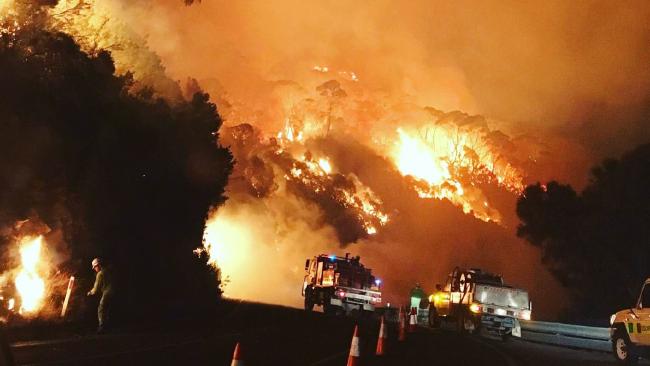 The total cost of the Christmas Day bushfires could top $100 million, with tourism bodies warning that the economic hit to the coastal region during its busiest period of the year could soar. 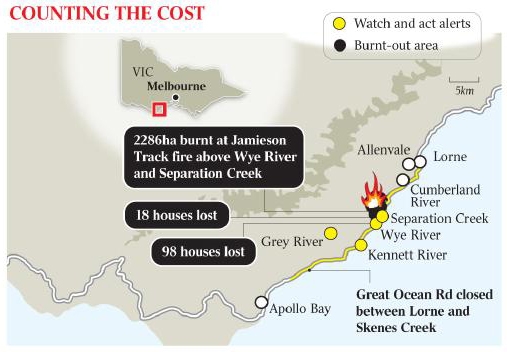 Many casual staff have been laid off temporarily in tourist towns along Victoria’s Great Ocean Road, amid concerns the bushfires will have a significant impact on the local economy.

The Great Ocean Road Region­al Tourism chairman, Wayne Kayler-Thomson, said early estimates put the economic loss to the coastal region because of a tourism decline at somewhere between $30m and $50m.

He warned, however, that that could rise as the tourist beat along the Great Ocean Road between Lorne and Skenes Creek remained closed and fires continued to burn out of control along the Jamieson Track near Lorne.

A spokesman for the Insurance Council of Australia said he expect­ed the early estimates cost of $38m to rise significantly during the next couple of weeks as residents and those with holiday homes continued to assess the damage.

Mr Kayler-Thomson said the fires had devastated the area during its busiest period, with locals to bear the brunt of the losses.

“This is the most-visited region in Victoria outside of Melbourne and this is the busiest time of year,” he said.

“Fifty per cent of visitations to the region happen in the first quarter of the year, and 30 per cent of those happen in January.

“And the busiest part of this is the Christmas and New Year ­period, up until January 11.”

Victorian Tourism Minister John Eren said it was too early to make a clear assessment of the damage to the local tourism industry and any potential government support.

“The Treasurer (Tim Pallas) and I will meet with the Great Ocean Road Regional Tourism board and local traders to discuss the effects of the fires and how government can provide support in attracting visitors back to the ­region,” he said.

Smoke had cleared in Lorne by yesterday morning. The smell of the fire was still in the air but seemed not to be deterring tourists and locals keen to pick up on their holidays and businesses from where they left off.

Business owners along the popular main shopping and tourist strip said it would take days to return to normal capacity and many seasonal and casual staff had been told not to return yet, but to remain­ on standby.

Rhyan Strickland, the manager of beachside restaurant The Lorne Pavilion, described the fires as a “Christmas tragedy”.

He said the turnover in previous years at this time was usually 300-400 ­people a day, but “we’ve had 80 today so far”. Mr Strickland said 15 casual staff members — mainly backpackers and uni stud­ents — who had evacuated along with the rest of the town had been told not to return to work for the time being because of the low numbers of tourists.

Lee Gordon, the general manager of the Cumberland Lorne Resort, the largest and most popular destination for tourists in the town, said while the bushfires would have “a major impact” on the local economy, holiday makers were returning with gusto.

He said that the resort had been evacu­ated on the advice of local police and the Country Fire Authority, but had returned to 75 per cent capacity.