Questions Raised by our Readers

It has been suggested that the further away from the coast you live, this less important you are to the NSW State Government.

This suggestion is supported with the following questions:

On a more positive note, the NSW State Government should be congratulated for the quicker responses to the Tathra Fire inquiry and their support of the recovery process BUT… there actions appear to be driven by a range of factors including:

The VFFA is constantly pushing the NSW Government, in particular the NSW RURAL Fire Service to restore it’s focus upon rural and regional NSW.

This does not mean that other areas need to suffer, but the service must undergo major reform to ensure that all people in NSW are afforded the same level of treatment.

Local MP and NSW Transport Minister Andrew Constance said the speed of the bushfire recovery in Tathra had been the best in the state’s history. Compared with the 2013 Blue Mountains fires, Mr Constance said: “This has been a 100 per cent-plus improvement in terms of co-ordination. This has taken recovery from a natural disaster to a new level.”

Perhaps we should be looking more closely at improving our bush fire risk management control measures.

Cool burning activities before the fire may well have saved many houses in Tathra, reduced private and public expenditure, helped to avoid the heartache and mental suffering that people are subjected to.

Here are a few factors to consider:

It is worth noting that the impact of these factors can vary significantly from farm to farm, block to block and farmer to farmer.

How the town of Tathra is slowly rebuilding after devastating bushfires

Locals told father Mitch Creary he was the “unluckiest bloke in Tathra”.

The pub owner’s 18-month-old house was razed in just “four minutes” in the devastating March 18 bushfires while the four properties surrounding his battle-axe block were “untouched”.

But four months on, Mr Creary and his wife Alexis are the first residents in the NSW South Coast town to start ­rebuilding, with the slab of concrete on their new five-bedroom home poured yesterday.

And others are soon set to follow the couple.

“My wife and I, we don’t like mucking around with anything.” 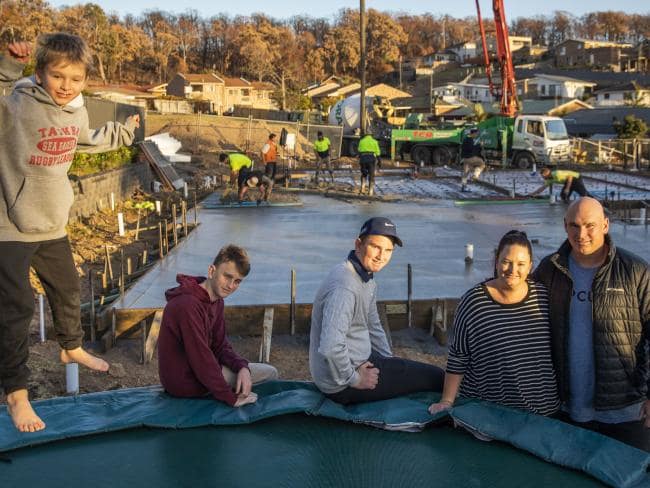 The Creary family stand on their block of land on Flora Place in Tathra as concrete is poured in the process of rebuilding their home. From left: Chad, 7, Brock, 14, Duke, 15, Alexis and Mitch. Picture: Sean Davey

Resident Jani Klotz’s distraught face when she saw, for the first time, that her beloved pole house was gone, reflected the tight-knit town’s pain.

“You don’t believe it until you see it,” the mother of two daughters said.

“Even though people have told you, it’s not until you see it with your own eyes you go ‘it’s real, it’s real’.”

Ms Klotz’s property was one of the first cleared after the bushfire. She’s now preparing to rebuild virtually an exact copy of her old “treehouse”, using the same plans and original builder.

Mr Creary, 42, said he still feels guilty about not saving his house — the first he had built and owned.

“Had I stayed, then maybe I would have been able to save it, but there was no way I was going to split my family up,” the former Manly Sea Eagles player and father of four said.

While he can’t replace his restored convertible Mustang, one of the many prized possessions lost in the fire, yesterday he and wife Alexis saw the bones of their new family home.

“My main priority as soon as it happened was getting the family back into a home.”

Tathra Post Office owner Deb Alker has been a shoulder to cry on for locals struggling in the aftermath of the fires.

“It’s a real emotional rollercoaster for all the people who have lost houses,” she said.

A member of a group helping residents rebuild, Mrs Alker said her parents were living with her and husband Ian after their home burned down.

Free counselling sessions have been making a difference.

Bega Rotary president Margaret Taylor has also been keeping an eye out for locals needing emotional support. Ms Taylor said the entire town had been affected, with the bushfire coming within 2m of her back door.

“We’ve got to watch out for people,” she said.

“It can be the simple expression of a cake on a doorstep, for example, which is what I did in one case, and that affirms that little family and gives them hope for the next day.

“Yes, it’s been tragic — absolutely tragic — you would not wish it on any community, but it happened and now we have to look at moving forward in a positive way and a caring way.”

For Mr Creary the way the community has come together has been inspiring.

“I honestly don’t think the council, the state government, the locals could have been any better than what they were and that’s probably the main thing that gets me emotional about the whole thing,” he said.

“It’s not so much the house, it’s just seeing everyone come together like they did.”

Donations were sent from around Australia while the state government allocated $10 million to help clean up. The Bega Valley Shire Council has also raised nearly $1.3 million.

Local MP and NSW Transport Minister Andrew Constance said the speed of the bushfire recovery in Tathra had been the best in the state’s history. Compared with the 2013 Blue Mountains fires, Mr Constance said: “This has been a 100 per cent-plus improvement in terms of co-ordination.”

“This has taken recovery from a natural disaster to a new level.”

“That’s been the most difficult thing — trying to get people to understand the town has bounced back and the physical impact on the tourism side of things was very minimal and the beach is still beautiful and everything around Tathra is still beautiful,” she said.

New tourism projects including a new coastal walk, a Bega to Tathra cycleway and a $600,000 playground have been expedited.

With the bushfire danger season starting in some parts of NSW on Wednesday, the clean-up lessons learned from Tathra will now be applied in the future to other fire-affected regions.

“People have required answers and they have been getting them and getting action,” Rural Fire Service Far South Coast district manager John Cullen said.